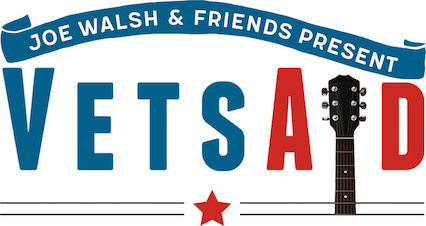 Recipients include Regional and National Organizations

In honor of Veterans Day,  Joe Walsh has announced the beneficiaries of the inaugural VetsAid concert which launched his new 501C Foundation.  The concert took place on September 20, 2017 and featured performances by Joe, Zac Brown Band, Keith Urban and Gary Clark Jr.  VetsAid has awarded $360,000 in grants to Veterans organizations spanning both regional and national. Disbursements have been made as follows to these organizations who provide a broad spectrum of essential services to veterans and their families:

"In my touring I have come across Veterans all over this country and have seen these smaller organizations, often run by Vets, working in their communities doing a lot of good, " Walsh explained.  "One of the main reasons I am launching VetsAid is to not only reward the well-established charity groups doing good works, some of which we have been able to contribute to and listed above, but also  to recognize and support these modest ones who are in the trenches and for whom a little money can go a long way!"

Providing support to organizations that care for the nation’s military wounded, ill and injured is deeply personal to Walsh, a Gold Star survivor whose father died while on active duty on Okinawa, Japan when Walsh was 20 months old. “It’s the least I could do for those who have served and continue to serve our country,” said Walsh. “We’re all in this together as Americans and it seems to me lately that people are forgetting that.”

For more information on VetsAid and the above listed charities please visit www.vetsaid.org

About Vets Aid: VetsAid is a national 501(c)3 non-profit organization started by rock legend Joe Walsh to raise and disperse sorely needed funds to veterans groups across the country that are helping the men and women who served our country, as well as their families, and showing them the dignity, compassion and honor they deserve.